Bangkok is a fascinating city as well as a major air hub for Southeast Asia. But it's large and spread out, which can make it difficult to track down its most interesting sights. These top 10 should give the visitor a good feeling for the city as well as an enjoyable stay.

The royal palace and Emerald Buddha Temple (Wat Phra Kaew) form a fascinating complex of buildings which has grown up over more than two centuries, and represents styles ranging from traditional Thai to European Beaux-Arts and neo-Renaissance. There are dazzling chandeliers, elegant gardens, statues of demons clad in colorful glittering tiles, golden spires, and of course the tiny emerald Buddha. There's even a scaled-down version of Angkor Wat. The tour groups start to arrive about 10 a.m. and it can be crowded, so get there early (the palace opens at 8:30 a.m.).

Wat Pho (formally Wat Pha Chetuphon) is best known for its colossal reclining Buddha, but there's much more to it than that. There's a huge cloister lined by small Buddha statues, Chinese-style pagodas and tall tiled chedis commemorating kings of Thailand. The buildings also house a set of inscriptions that make it a huge textbook, and it's a centre for Thai traditional medicine, with a massage school that offers appointments to visitors. Nicest of all, though, are the Chinese stone figures dotted throughout the grounds. They arrived as ballast in Chinese trading ships and were meant to be jettisoned in the river, but the Thais decided they liked them, and they've been here ever since.

Wat Arun, on the other side of the river from the palace and Wat Pho, has a massive prang (spire) surrounded by four smaller ones, all of them decorated with tiny pieces of tile. Much of it is Chinese porcelain which had got broken on the way over. Though the top of the main prang is now closed, it's still possible to climb up to the first level, for views over Bangkok and a close up view of the decoration. The Chao Praya river is one of Bangkok's great sights, and the best way to see it is by river boat. Big barges still take freight up and down river, and contend with the longtail boats, regular boat service, and cross-river ferries for priority. Along the banks old wooden houses and shacks built on pilings jostle up against sparkling new shopping malls and bars, with the spires of temples on the Thonburi side and the great glittering prangs of the royal palace and Wat Pho reflecting the sun.

You can buy pretty much anything in Jatujak market; parrots, puppies, paper flowers, tableware, T-shirts, tropical fish, silk, ceramics, or woodcarvings, you name it, Jatujak has it. Finding it might be a bit trickier, as the market is huge, though the information service near the entrance offers maps and advice. If you're after food, there's a farmer's market with fast food stalls just across Kampangphaet Road, or you can grab fruit or noodles in the market. Note that Jatujak is only open weekends.

Bangkok is a very modern city but it still has two lovely little corners of traditional wooden houses, both now museums; the Suan Pakkad palace and the Jim Thompson House. Both are now museums, and both are collections of old Thai architecture brought from elsewhere and re-erected to create a new ensemble right under the noses of the skyscrapers of central Bangkok. Visit one or the other, or if you have time, both. 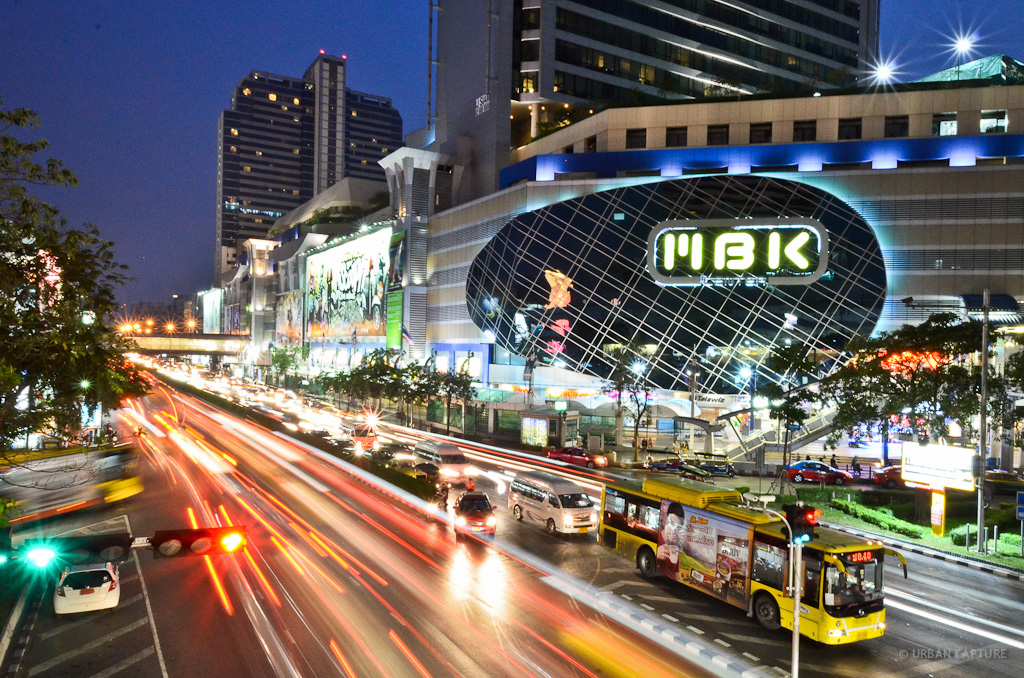 Modern Bangkok has to be experienced too, so take the Skytrain to Siam Square for a taste of air-conditioned luxury shopping. Siam Paragon is incredibly up-market, while MBK offers more variety - depending where you go in the mall, you'll find tourist-orientated tat, useful little watch, mobile phone, and stationery kiosks aimed at the Thai market, and even a Japanese department store. All the malls have food courts which pride themselves on a wide variety of cuisine, from sushi to spaghetti. But Bangkok being Bangkok, all this comes along with a traditional twist: the Erawan Shrine, always busy with worshippers and photographers, where girls dance in Thai classical style to the sound of xylophones and cymbals, and offerings including food, flowers, and model elephants.

Wat Saket was originally a huge brickwork stupa, but after the foundations started to collapse, became a greenery-covered mound. Steps wind up through the bamboo to the great golden stupa on top, from which there are views of the old district of Rattanakosin, the Chao Praya river and the modern city away to the east. On the way down, pilgrims bang the gongs that hang by the stairway.

The Klong Saen Saep boat service shows a different side of Bangkok from the main river. This boat runs east from Banglamphu towards the university area, often at high speed along the narrow canal, with water threatening to splash into the boat. It's a chance to see life going on in the small houses along the canal path, and you'll rarely see another farang (foreigner) on the boat. Those with more time (and money) could take a longtail boat tour of the Thonburi canals, instead.

The street food of Bangkok is one of its great attractions; from banana fritters on the pavement in Banglamphu market or pineapple with minced red chilli and sugar sold by street corner vendors to fishcakes shaped and coloured to resemble Hello Kitty or Angry Birds, it's almost always interesting as well as tasty. Curry rice, satay, and noodle soup are regular standbys, but watch out for the specialties from Isaan (northeast Thailand) -- the amount of chili added makes Isaan food scorchingly hot!

Bangkok has many other interesting attractions, from the royal barge museum to floating markets and Chinese tiger temples. Seek out these 10 sights, though, and you'll get a taste of all the different sides that make up this complex and fascinating city.